This is a pilot program for the bank, and customers can enroll to have the option should their spending desires require larger quantities than the amount they currently have in their bank account. When making a purchase that would put the customer in the red, a text message will instantly be sent to the user and they can accept to make the purchase for a $35 overdraft fee.

Bank of America decided to move forward with the program in order to better inform their customers if and when they were going to be negative in their accounts, and to empower them to make a decision as to whether they really want to make a purchase or not.

The decision has a legal basis as well. Last year, law makers decided to ban banks from enrolling customers in overdraft programs without their active consent. Sending a text message is the most active and accurate way to gain approval, because it allows the approval of a purchase that results in an overdraft fee to be made at the time of purchase. The great part is that if the customer deposits the correct amount of money into their account by the end of the day, they do not incur the fee.

An interesting new study done by the University of Pennsylvania shows how consumers value their favorite communication mediums, including email, texting, cell phone calls, and Facebook.

The study divided students into groups and out of the 4 communication mediums listed above, asked them which of those tools they would go without for a week. Once the student chose, he or she were banned from using it for a week. Next, the study participant was asked how much, in monetary value, he or she would like to be compensated for the ban.

“The survey of 84 students ages 18 to 22 found that they thought $44 would be “fair compensation” for going without Facebook for a week — compared with $99 for email, $85 for texting and $73 for cellphone calls. One tool — instant messaging — was identified as less valuable, coming in at $27 for a week.” (Wall Street Journal, How Long Could You Go Without Facebook?)

The reason for this was that students said that they only communicated with acquaintances on Facebook, while texting and email was used for connecting with closer friends and family. For students, email is clearly most important as they work on papers and projects in groups and they need to be able to send large files. However, as a communication tool, it’s clear that texting still reigns, shown here by its compensation value of $85.

This Century’s Change in Consumer Behavior: From Calls to Text Messaging

Alexander Graham Bell is probably looking down at today’s world thinking about how ungrateful we all are for his wonderful invention from so many years ago. After all, he gave us the power to transmit voice across oceans and have conversations with people who are not standing next to us.

Nowadays, things have changed. Does anyone even remember what pay phones are or that back in the day, you had to return home to make a call on your landline? Not really, and especially not if you’re a tweens, teens, or young adults. Conversations take place via Facebook chat, BBM, instant messaging on Gmail or MSN messenger, or by text messaging. Along these lines, the Today show ran a recent story entitled “The death of the telephone.”

Since 2007, the length of a call has been steadily declining and is half of what it used to be. Voicemail? It’s pretty certain that if you leave a voice message, it will not get checked. Why is this? That’s a great questions and one that the Today show decided to investigate. They questioned three twenty-something college students who said that they liked that you can control your conversation better through this communication medium. With text messaging, they can take their time to reply and strategize as to the best possible answer to a tricky question, whereas when on a call, they would have to respond immediately. One of the participants even commented that he thinks he sounds “better” via text.

Times are a’changin’, and since the young are an indication of trends to come, this is one trend that is not stopping. We suggest joining the massive conversation taking place via text messaging as soon as possible.

Texting Has It All When Compared to Apps

We’re firm believers in text message marketing campaigns and the numerous advantages of using texts over downloadable apps in the marketing world. A recent Adweek article urges businesses choosing between the two to stick with the undeniable reach and results that come with text messaging.

Why is texting superior you ask? Well, it has a lot to do with reach and usage. Juniper Research predicts that smartphones will account for only 23 percent of all new handsets sold per year by 2013. In comparison, nearly every cell phone in the U.S. is able to receive and send text messages. In addition, texting is an every day form of communication, so marketing with texts means reaching clients via their chosen medium. Texting allows businesses to contact customers immediately, wherever they are. What’s more, it doesn’t require customers to locate and download the latest app for information.

An October 2009 report from Strategy Analytics showed that only four to six mobile apps are typically used on an a consistent basis. Constantly competing with the most exciting and buzz-worthy apps available, brands lose out when older apps go unused or hit the recycle bin. In contrast, text messages are simple and reside within the prime real estate of the message list, among our daily conversations.

While there is definitely a time and place for apps, consumer contact and dialogue is maintained with text message marketing. It’s Opt It’s opinion that engaging customers for the long haul is the best way to generate return on investment.

Co-founders Brian Stafford and Michael Lamb were guests on Chicago’s CBS 2 morning news show, “Monsters & Money” on February 19. The interview focused on how Opt It, Inc. is revolutionizing the way companies get the word out to consumers via text messaging.

Video is no longer available online. 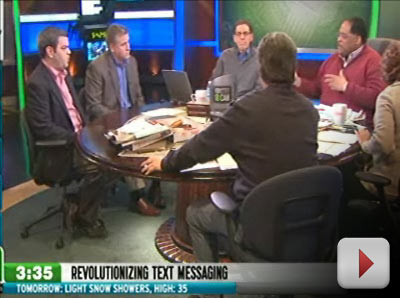